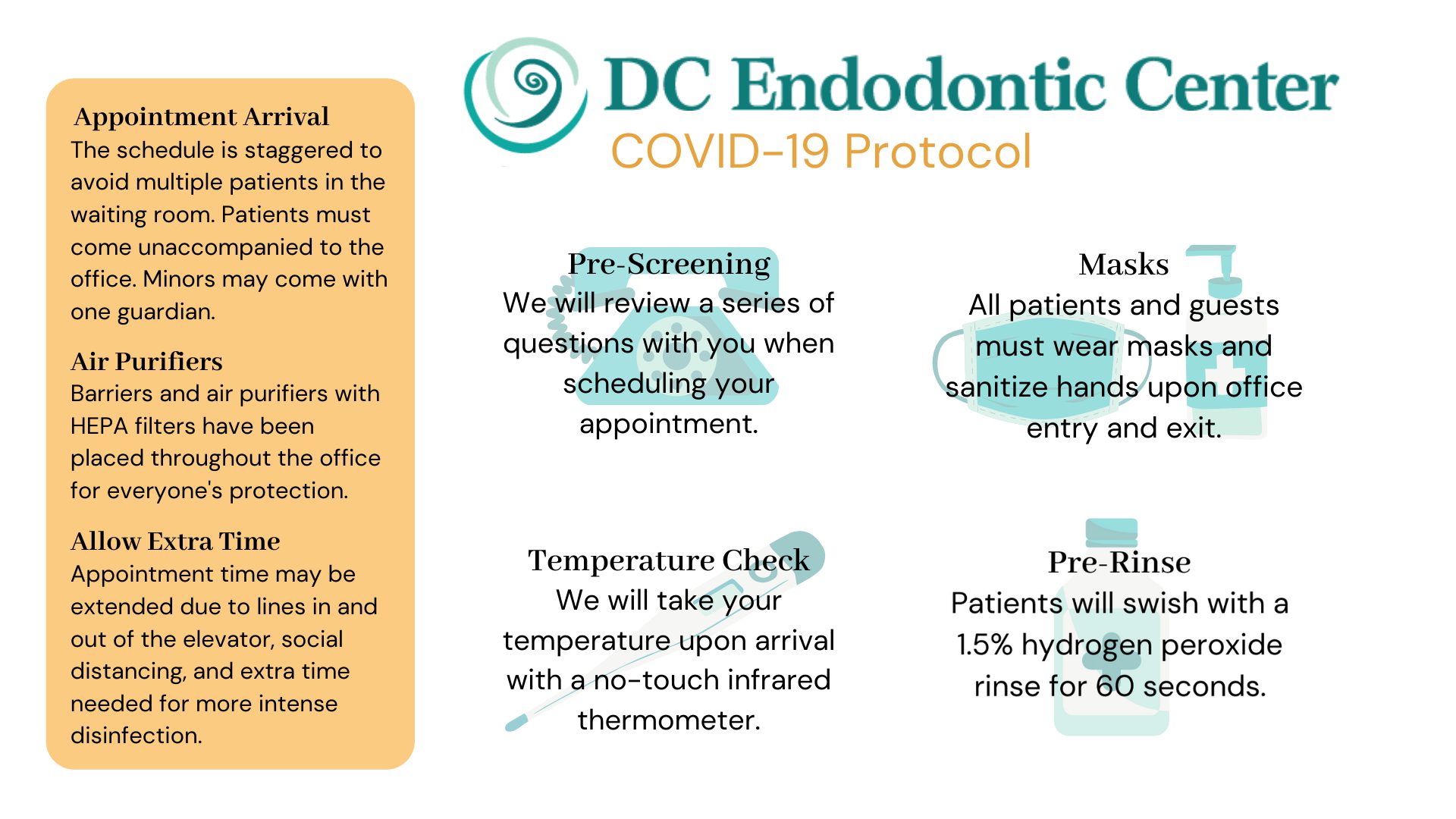 How much pain will I have AFTER treatment?Expand

Most patients will experience moderate discomfort after treatment. It is normal, not to be able to chew or bite on the area of the tooth that was treated. The tooth itself, will feel very tender to touch, pressure or tapping therefore It is important to have a soft diet and to follow your doctor's directions on the use of recommended medication.  After treatment, most patients will return to work or their regular daily activities.

Most patients will respond favorably to anti-inflammatories 3 times a day, for the first 3-5 days after treatment. If you cannot take anti-inflammatories such as aspirin, Advil, Motrin or Ibuprofen, be sure to discuss it with Dr. Noguera. A replacement medication will be suggested.

Will my Tooth Discolor AFTER Root Canal Treatment?Expand

With all the new technology and the development of finer dental materials, your tooth should NOT discolor after root canal treatment.  If you have a tooth that had root canal treatment and is now discolored, you should have it evaluated by the endodontist. Many times, it is possible to perform a simple treatment called "Non-vital Bleaching" to whiten the dark tooth. This procedure requires the specialist to re-enter the old root canal to lighten the tooth from the "inside". This is not to be confused with regular over-the-counter bleaching which lightens the tooth on the outer surface.

How does the "nerve" become damaged or Infected?Expand

The nerve, also known as the pulp, will become infected or damaged because of bacterial penetration.  Bacteria are a normal host in the mouth and saliva, but when it gets inside the tooth, via a defective filling, decay or a fracture, it becomes pathologic.  The time frame for this to occur varies. sometimes, it can be very fast and painful and other times it is a slow painless process in which the patient is unaware until it is significantly advanced.

With modern technology and better anesthetics root canal treatments are no more painful than having a filling. Knowing what to expect while having a root canal can help ease a lot of anxiety.  We will take every measure to ensure that your procedure is comfortable and not painful. If treatment is needed, we will inject a sufficient amount of anesthesia to numb a concentrated area of your mouth. For most patients, the feeling of numbness usually subsides after 2-3 hours.

If the Tooth Doesn’t Hurt, There is No Need for a Root CanalExpand

While a throbbing toothache usually results in the need for root canal treatment, many times a tooth can require root canal treatment when there is no pain present. Dr. Noguera is specially trained to test a tooth to see if the pulp has been infected or damaged. If this is the case, a root canal would be necessary to save the tooth.

Extracting (Pulling) the Tooth is Better than Getting a Root CanalExpand

Keeping your natural teeth for as long as possible is very important for proper eating and chewing functions. There are several options available for missing teeth, such as complete dentures, partial dentures, dental implants, and fixed dental bridges. These alternatives, however, can be much more expensive than saving your tooth with a root canal treatment.

Sometimes a tooth is fractured down into the bone, or has lost too much of the visible structure due to decay. If the prognosis of your tooth is unfavorable, then it is best to consider extraction.

Root canal therapy is generally all that is needed to save a tooth from extraction.  However, there are occasions when after a root canal, surgery is necessary to save a tooth.  This is known as an apicoectomy or root-end resection.    An incision is made in the gum and through a curettage, any inflamed or infected tissue is removed.  The tip of the root is also removed and a root-end filling is placed to prevent reinfection of the root.  The gum is then closed with a few sutures.  The bone heals around the root over the next several months. This procedure is done usually under local anesthetic and patients can return to work immediately after the procedure.

What is Pulpal Regeneration and Apexification?Expand

These procedures are performed on permanent teeth that are not fully developed, most often in children.  They take the patient out of pain, and the goal is to allow the root of the tooth to continue to develop. The root will grow in length, the tip of the root will close and the walls of the root canal will thicken.  A fully mature tooth with thicker dentine walls is desirable for long term retention. In other words, the tooth longevity will improve.

What is Cone Beam Computed Tomography (CBCT) or a 3D X-ray?Expand

Recently we upgraded our CBCT X-Ray machine to a new Carestream 8100.  CBCT stands for Cone Beam Computed Tomography ("tomo" means slices).  The CBCT machine is a safer, faster, and more compact version of the regular CT-scan machines found in hospitals and imaging centers. As a result, the  CBCT delivers a much lower amount of radiation as compared to regular CT machines, but more than traditional x-rays.  One CBCT scan provides about 500 small X-ray images of the tooth: each one is called a slice.  We are then able to reconstruct an internal view of the tooth using several slices, rendering a 3-D image.  The image can then be rotated on a computer screen and viewed from any angle.  The information gained from our 3D technology gives us many advantages and aids in the successful treatment of your tooth.

Some frequently asked questions about CBCT are:

The CBCT takes approximately 15-20 seconds to scan the desired area.  After the scan is finished it only takes a moment to configure the images.  The scan is then able to be viewed on your computer screen or copied onto a disc.

Generally, a CBCT scan is done in cases where a tooth or an area of the mouth remains symptomatic, and /or conventional x-rays have been taken without success. Cases, where traditional methods have failed to provide the necessary information, and the treating doctor remains unable to diagnose and much less treat the problem.  Teeth that have been previously treated with root canal therapy but may need further evaluation.  Such as those that remain infected after proper root canal therapy has been done, and there is no apparent reason why the tooth does not heal.

In addition to the 2-dimensional x-Rays, the CBCT scan can be very helpful in teeth that have suffered a traumatic injury.  It can show the type and extent of injury. And in cases of root resorption, the CBCT can clearly show the area, anteroposterior location, and amount of resorption present.

Additionally, if a tooth is to be replaced by an implant, a pre-implant bone and nerve assessment using the CBCT is routinely performed to assure that the implant will be placed in safe distance from arteries, veins, and nerves. Finally, a CBCT scan can show cysts, some tumors, and their respective position within the jaw.